In Bruton Town there lived a farmer,
Who had two sons and a daughter dear.
By day and night they were contriving
To fill their parents' heart with fear.

He told his secrets to no other,
Unto his brother this he said:
'I think our servant courts our sister.
I think they has a great mind to wed.
I'll put an end to all their courtship.
I'll send him silent to his grave.'

They asked him to go out a-hunting,
Without any fear or strife,
And these two bold and wicked villains
Took away this young man's life.

And in the ditch there was no water,
Where only bush and briars grew.
They could not hide the blood of slaughter,
So in the ditch his body they threw.

When they returnèd home from hunting,
She's asking for a serving man,
'I ask because I see you whisper,
Brothers, tell me if you can.'

'O sister, sister, you do offend me
Because you so examine me,
We lost him where we've been a-hunting
No more of him we could not see.'

As she lay dreaming on her pillow,
She thought she saw her heart's delight;
By her bed side as she lay weeping,
He was dressed all in his bloody coat.

In such a place you may me find.'

As she early rose the very next morning,
With a heavy sigh and a bitter groan,
The only love that she admired,
She found in the ditch where he was thrown.

The blood upon his lips was drying,
Her tears was salt as any brine.
She sometimes kissed him, sometimes crying:
'Here lies the dearest friend of mine.'

Three days and nights she did sit by him,
And her poor heart was filled with woe,
And cruel hunger crept upon her,
And home she was obliged to go.

'Sister, sister, why do you whisper,
And won't you tell me where you've been?'
'Stand off, stand off, you bloody butchers,
My love and I you have both slain.'

As sung by Martin Simpson (transcribed by Micheál H). 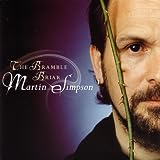